Thanks for all your votes and comments. I think I'm going to keep the paisley shirt, black pants, mock turtleneck, belt, and tie. The designer jeans, striped shirt, and patterned shirt are going to go back. I was almost going to keep the striped shirt; I showed a picture to my sister and she thought it looked good, and I thought I kind of liked it, too. But when I put it on again, it was just too much: a photo softens the contrast and loudness of the stripes. And I'm still a little torn on the patterned shirt; it's interesting, but a little loud.

fanlain (and many of you) says it looks better with a sweater, but I don't think I want to get a shirt that I can only wear with a sweater over it. If nothing else, I get hot easily and like being able to take the sweater off. I actually don't mind the designer jeans too much, but I don't wear jeans very often in general, and I think they're the most expensive item in the collection.

Overall, I decided that Cool Nights was the wrong profile for me. I chose it mainly because many of the pictures showed solid color shirts in bold colors, which is something I like. But the description says that "The Cool Nights selection can be described as going-out clothes with a youthful flare." But I don't do very much going out, and while I'm interested in an update to my wardrobe, "flare" is not what I'm looking for.

So I decided to switch over to Tomorrow's Boss for my next shipment. The description still mentions "youthful flare" (it looks like they didn't break the bank on their writers), but it also talks about building "sharp wardrobe for a day in the office or a night out." That's definitely more of what I'm looking for; from what I can see, the styles are not too conservative, but I don't think I'm likely to get loud patterns from this collection.

While browsing Facebook a month or so ago, I came across an ad for OutfitEZ. "Hate shopping for clothes?" it asked. Why yes, I do! I checked out the website. It's a service that picks out and sends clothes for you to wear once every quarter. The idea is that someone with more taste than you picks out outfits that are coordinated and they get delivered right to your door. A dream come true, right? What I found funny is that the makers of the site decided there's no point even mentioning that the service caters exclusively to men. (Though now,

fanlain is a little bit jealous.)

It sounded tempting, and I decided to try them out. The price isn't cheap: $100/month, but it works out to roughly $40 per item of clothing, inclusive of shipping and tax (well, there's no tax charged unless you're in Colorado). They also have plans for $50 or $150, though the per-item price stays the same. You get to select your size, your profile (I picked Cool Nights), and some other things, like whether you live in a warm or cold climate, your complexion, etc. 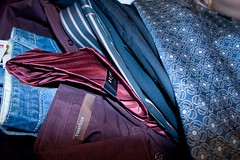 My first shipment arrived a couple of days ago, but I finally got to look through it this evening. The collection includes:

One of the reasons I liked the idea of OutfitEZ is that it would be a way to leave my comfort zone and try something new; this shipment definitely did not disappoint in that respect. I think other than the pants, and maybe the belt, I would not have bought any of the rest of the things myself. But I'm pretty sure I'll keep most of these things. You're allowed to return items you don't like, but they recommend you get a second opinion before discarding an item. So this is where you come in.

fanlain and I decided to do a photo shoot to get comments. I put all the photos in a Flickr set. What do you think? Rate them from 1 to 5, where 5 means "ooh, snazzy!" and 1 means "ow! my eyes!"

Open to: All, detailed results viewable to: All. Participants: 17

... buttoned all the way up

Designer jeans (keep or not?)

Mock turtleneck, not tucked in