Well, this was s upposed to be our first weekend in a long time where we stayed home, and we did a good job Saturday, only leaving the house briefly to meet a dog breeder and getting nearly nothing else done. Today, though, we decided to leave town once again and see another breeder west of Chicago. So we got up a bit before 8 and were on the road before 9 to make the 3-3.5 hour trek. We stopped for late breakfast at Pete's Pancake House and Family Restaurant, where the median age of the customers was over 50, and the median weight was way over 200 pounds. To encourage us to get into that demographic, they served me three pancakes slathered with whipped cream and strawberries (I only asked for 2), and

While at breakfast, we decided to develop code words to communicate to each other whether we liked the breeder's puppies enough to put down a deposit. (Things were a bit awkward yesterday where we wanted to have that kind of discussion but didn't feel like doing it in front of the breeder.) We decided that if one of us felt happy with the puppies, we would say "the puppy has a cute nose." If the other person felt less happy, he or she should simply agree non-commitally, something like "yes, it does." If, on the other hand, he/she also agreed and thought we should take the puppy, he/she'd need to say "yes, and his coat is a great shade of chocolate." 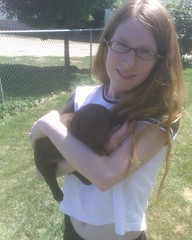 With all of that down, we headed to the breeder, where we were met with the breeder's daughter. Turns out that this system was wholly unnecessary, as the daughter, after showing us the three most adorable chocolate puppies, left us alone so that we could talk. (And the puppies were adorable! At one point, all three tried to squeeze between my feet, despite the fact that there was only room for about a puppy and a half!)

fanlain, undaunted, mentioned their nose right away, but I was a little more hesitant. These breeders were clearly less professional than most of the others we'd talked to online, but on the other hand, they had good dogs, great puppies, and they had done the necessary health tests on the sire and dam. The puppies also seemed to be much more active and developed than the ones we had seen yesterday, who were the same age (to the day). They were actually getting up and walking a bit, instead of barely crawling around.

After much discussion, we finally agreed to put down a deposit on a puppy, who will come home with us in just over a month. !!! To celebrate, we made a quick stop at IKEA on the way home, and then made it to a Thai restaurant in the middle of nowhere, Chicago suburbs, that had surprisingly good food, though very lackluster service. We spent the drive home thinking of names. Our current favorites are "Miles" and "Simon" (some explanations suggested that Simon means "obedient," which I think is a good name for a lab), but we mostly figured that we're bad at names, so if you have suggestions, we're all ears. We have 34 days!
Collapse