T-9 hours till homeownership. Last I talked to them, the lender claimed that they had (just) sent the documents to the title company by email and the title company claimed that they hadn't received them yet. I suppose I could have kept calling back and forth, but I had to go to the bank to write the biggest cheque of my life (well, ok, the bank got to write it, I just had to show ID) before it closed.

fanlain convinced me that I just have to let it be and hope that they work it out in time, since there's nothing else I can do now. So I guess it's time to go to sleep... 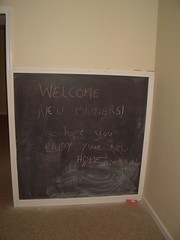 We did the walk-through at 9am, nearly everything looked fine. There were (naturally) some marks on the walls that we'll need to fix (or completely repaint over), and some minor problems with the garage door and a bit of trash, but the seller said the opener is easy to fix and the trash will be picked up on Monday. It was nice to walk around the now-empty house;

fanlain pointed out that with all the stuff gone, it's easier to think of it as our space.

Then we went to the title company, where we met for the first time the seller (the husband of the pair was there today; I had met the wife previously) and our lawyer. And then the mountain of paperwork began. We signed our settlement numbers, went over some of the mortgage documents, and then noticed that our names in the title company documents didn't match the mortgage documents, so we had to fix that by getting a new set of settlement documents to sign. (Much easier than getting a new version of the hundreds of pages of mortgage documents, especially seeing as our lender employs the slowest people ever.)

We then went on to signing our life away. This transaction succeeded in topping the number of documents we had to sign to lease our current place. I think part of the issue is that both of our loans may end up being resold, and they want to make sure that whoever may buy them is satisfied. For example, we had to sign five or six documents agreeing to the balloon payment rider on our second loan. (The whole balloon thing was new to us, and slightly disturbing, but it only takes effect after 15 years and we plan to have our second paid off before then.)

We also discovered that our mortgage company was planning to pay our next tax bill, which is something the title company was doing also, and was therefore escrowing too much money. We considered for a while whether to fix it, but this would mean that we'd have to get yet another copy of the settlement documents and a bunch of other things changed, and seeing as we'd already spent an hour and a half signing things, we finally decided to skip it and just have the escrow amount adjusted after the fact. (We did get to sign a paper explaining to us how this works.)

We were finally done a little before noon, by which time the wire from the lender had arrived, and then we sat there waiting for the mortgage company to call us and say it's ok to use the money. After the familiar period of not hearing from them for a while, everyone decided that perhaps it's time to go on with our days and pick up the final settlement cheques later. So now we have the house (and the keys), we filled out all the documents, but technically haven't paid for it yet. I'm still a little nervous that some problem will surface, but once again, it's out of my hands now.

ETA: They just called, everything is set and we can pick up the last cheque. Now I can finally relax!
Collapse