We once again proved that if we leave work early and hop on a plane, we can just catch the tail end of

bab5. It's almost tempting to do this more often, were it not for the flight costs, the time stuck on an airplane, and the fact that I will teach a class on Fridays next semester. We made it to

eviladmin's by around midnight and I was in his hot tub about 10 minutes after that. Ah, California...

We stayed up until about 3 in the morning, though I dozed off for a bit while

zestyping was showing how to do a few poi tricks without smacking yourself with the poi. Next morning,after dropping off my suit for dry cleaning (I hope it's done by now), I called my favourite hairdresser, at

fanlain's insistence. I asked her if she had any time available Friday or Saturday, and she said "No.... wait, who is this?" Once she figured out who I was and that I was only in town for a couple of days, she decided to squeeze me in at noon. I had to reschedule lunch with

tlaad but I was able to see her and she did her magic on my hair. She's a little expensive for a haircut, but definitely worth it: she's a perfectionist, and after she cuts your hair, she will spend something like half an hour blow-drying it, making small adjustments, perhaps wetting things again and cutting some more, and so on.

After this was done, we met up with the now-starving

tlaad who took us to "CU Sushi Roll," oddly enough located not in Champaign-Urbana, as the name would suggests, but near the (now closed!) "Act I/II" in Berkeley. The sushi was better than anything you could find in our neck of the woods, and the company was great, since we'd not seen

tlaad in ages and ages...

Sated on sushi, we took off for San Francisco the city (

fanlain corrected me) to look at furniture at Room and Board. We wanted to get a better sense of the colours of the furniture we liked, and also to think about sofas. We ended up spending two hours with one of their sales associates who helped us look at sofas and coffee and dining room tables. It turned into a long discussion of interior design and I'm now thinking that we will need to go back to the store in Chicago to look at more furniture and talk to some of their colour and space planning consultants.

zestyping's fire dancing performance. Turns out that I don't like any of the place settings there, so the ones we had are off our registry and we're back to the drawing board. We ran into

linley at Blondie's and then met up with more people in Union Square to watch fire dancing. 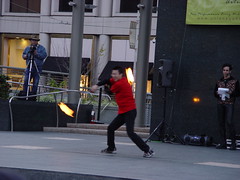 The show was pretty cool;

zestyping did an awesome job opening the performance! The most exciting part of the show was this dancer with a "fire wand" — a wand with one end on fire that appeared to float in front of the dancer as she moved. It was very well done! Unfortunately, I ran out of batteries by the time she came on, but I did managed to get a few good pictures in.

We finished off the day by going to

eisenbud's birthday party. We got to meet many people, eat several types of cake, and see

eisenbud's apartment, which has many exciting features, including a 180º rotating wall panel, which he really needs to motorize and activate by turning a book on his bookcase. I started dozing off just past midnight and thought of leaving around 1 am, but then

oddthink showed up, so we stayed up talking for a while (well, I was only half awake) until

eisenbud finally kicked us out. Seeing as we were in the neighbourhood, we stopped by for a quick tour

kryscat's new house before heading back to

eviladmin's. We managed to avoid most of the Bay bridge construction craziness; it took us only about 15 minutes of stop-and-go traffic to get on, mainly because I missed a turn for the official detour route.

eviladmin, on the other hand, took the official path and apparently got stuck for an hour and a half. Hmm.. that's definitely one thing I don't miss about the Bay area.
Collapse